[...] I lived in the south of Spain for a year and absolutely loved it, so here are some of my observations about life in Spain. I know some may be more true of the south than everywhere, but still, I hope you like them! And I realise that not everyone will agree, so please understand that these are the comments of a young foreigner who spent a year in Spain rather than a Spanish person! I'm not trying to offend anyone, that is the last thing I want to do. These are just some of the things I noticed about Spanish life which makes it different to life in the UK. And it is meant to be taken as 'tongue in cheek...'

1) You think adding lemonade, fanta or even coke to red wine is a good idea.

2) You can't get over how early bars & clubs shut back home - surely they're shutting just as you should be going out?

3) You aren't just surprised that the plumber/decorator has turned up on time, you're surprised he turned up at all.

4) You've been part of a botellon.

5) You think it's fine to comment on everyone's appearance. And to openly stare at strangers.

6) Not giving every new acquaintance dos besos seems so rude.

7) You're shocked by people getting their legs out at the first hint of sun - surely they should wait until at least late June?

8) On msn you sometimes type 'jajaja' instead of 'hahaha'

9) You think that aceite de oliva is a vital part of every meal. And don't understand how anyone could think olive oil on toast is weird.

10) You're amazed when TV ad breaks last less than half an hour, especially right before the end of films.

11) You forget to say please when asking for things - you implied it in your tone of voice, right?

14) You don't see sunflower seeds as a healthy snack - they're just what all the cool kids eat.

18) You know how to eat boquerones.

19) A bull's head on the wall of a bar isn't a talking point for you, it's just a part of the decor.

20) You eat lunch after 2pm & would never even think of having your evening meal before 9.

21) You know that after 2pm there's no point in going shopping, you might as well just have a siesta until 5 when the shops re-open.

22) If anyone insults your mother, they better watch out...

23) You know how to change a bombona. And if you don't, you were either lazy or lucky enough to live somewhere nice.

24) It's not rude to answer the intercom to your flat by asking 'Quien?' (or maybe that was just my flatmate...)

25) You don't accept beer that's anything less than ice-cold.

27) The sound of mopeds in the background is the soundtrack to your life.

28) You know that the mullet didn't just happen in the 80s. It is alive and well in Spain.

29) You know the difference between cojones and cajones, tener calor and estar caliente, bacalao and bakalao, pollo and polla, estar hecho polvo and echar un polvo...and maybe you learned the differences the hard way!

30) On some Sunday mornings you sometimes have breakfast before going to bed, not after you get up.

31) You don't see anything wrong with having a couple of beers before lunch if you feel like it.

32) Floors in certain bars are an ideal dumping ground for your colillas, servilletas etc. Why use a bin?!

33) You see clapping as an art form, not just a way to express approval.

34) You know ensaladilla rusa has nothing to do with Russia.

35) When you burst out laughing every time you see a Mitsubishi Pajero (thanks Stuart Line for reminding me of that one!)

38)When you make arrangements to meet friends at 3, the first person turns up at 3.15...if you're lucky!

39) Central heating is most definitely a foreign concept. In winter, you just huddle around the heater under the table & pull the blanket up over your knees...and sleep with about 5 blankets on your bed! (OK I accepot this is probably just in the south!)

40) When you laugh, you don't laugh your head off - te partas de risa.

41) Aceite de oliva is 'muy sano', of course. So you help yourself to a bit more.

42) Every single news bulletin on TV has at least 10 minutes on Real Madrid news and another 10 on Barcelona news.

43) When it's totally normal for every kitchen to have a deep-fat fryer but no kettle.

48) Blonde girls actually start to think their name is 'rubia'

52) You know the jingle for Los Cuarenta Principales...

53) If you see someone wearing a T-shirt with something written on it in English, you can almost guarantee it won't make sense. (Pebble Night was a personal favourite)

54) When you go into a bank/bakery etc, it's standard practice to ask 'Quien es la ultima?'

55) Who needs a dryer when you have a washing line outside the window of your apartment?

57) You are more likely to call your friends tio/a, nena, chaval, macho or even tronco than their real name.

58) Love it or hate it, you can't escape reggaeton.

60) You carry on buying UHT milk when you get back home and your friends think this is disgusting but you can't understand their point of view.

61) Jamon, jamon y mas jamon....
(Can't say this was my favourite thing, being a a vegetarian and all, but I agree it's very much part of Spanish life!)

62) If you eat a lot of something, you're not going to 'turn into' it, you're going to 'get the face of it,' e.g 'te vas a poner cara de chocolate.' Somehow a lot more amusing!

63) Drinking coffee out of a glass is entirely normal.

64) 'Son las nueve, las ocho en Canarias' is how you are used to hearing radio DJs announce the time

65) You've been to your local town's feria/fiesta/semana santa

66) You're familiar with the term 'la crisis.' And have started shopping at Dia as a result (and of course, you take your own carrier bag). 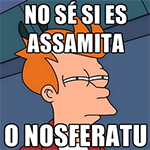